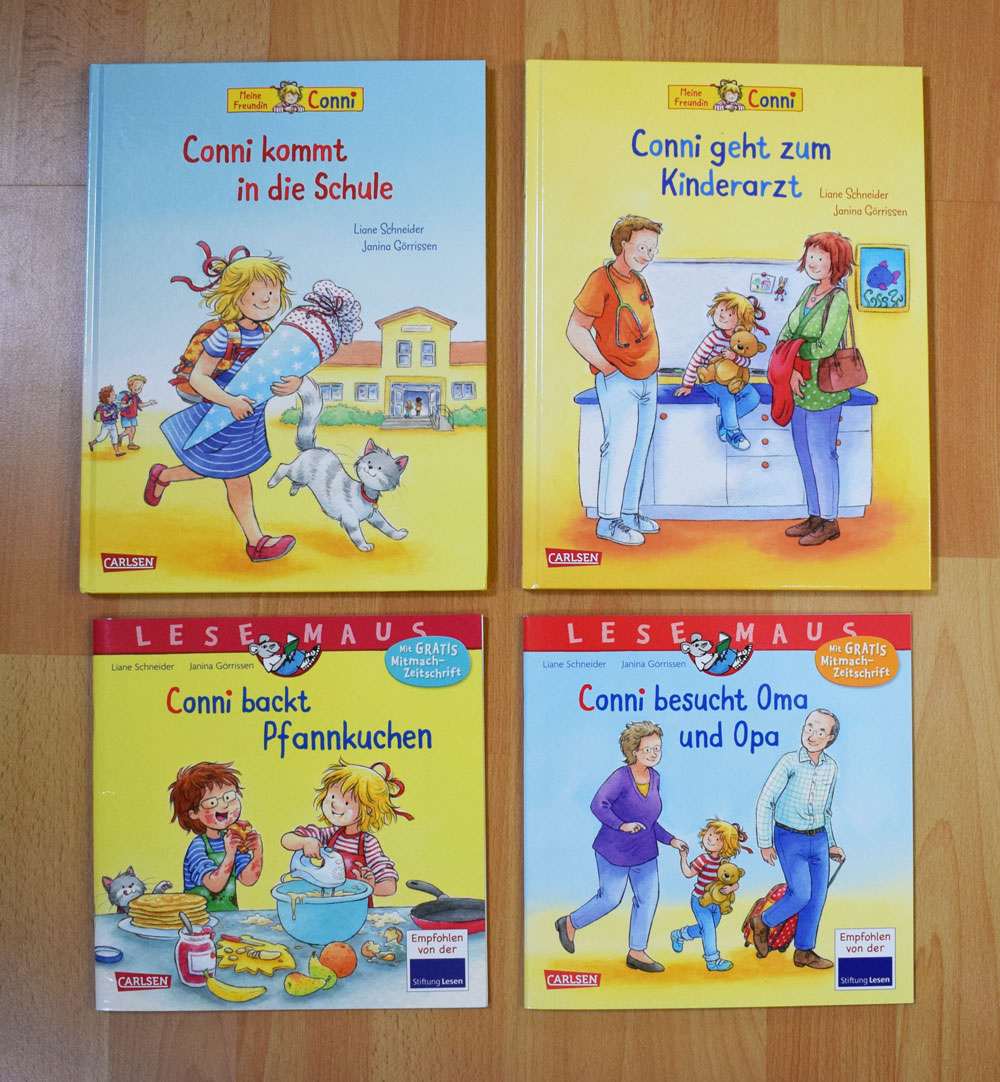 In 2018, we published 4 new Conni picture books. So I just want to show you a few of my favourite pages!

These are from “Conni goes to school” (“Conni kommt in die Schule”): 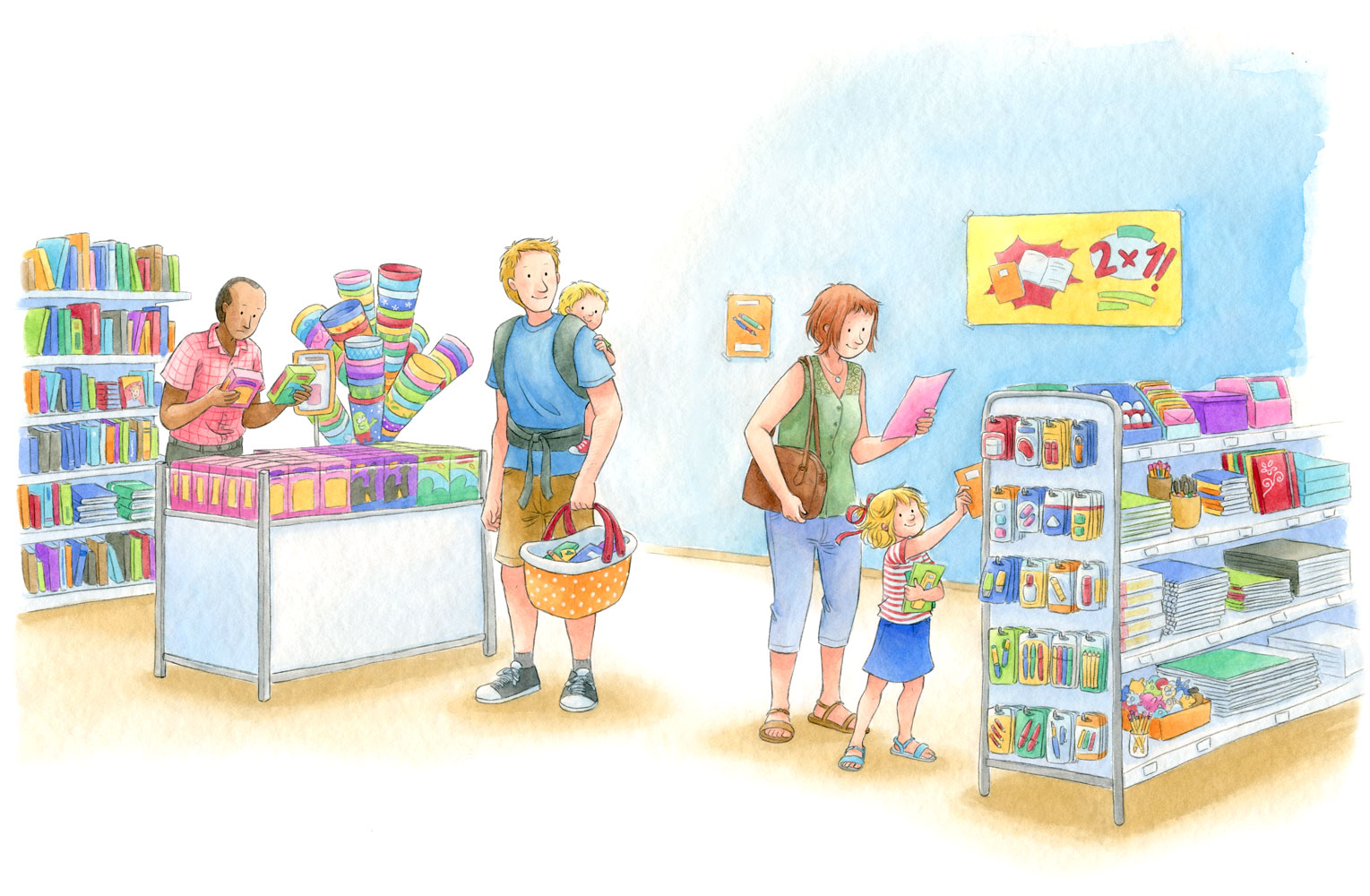 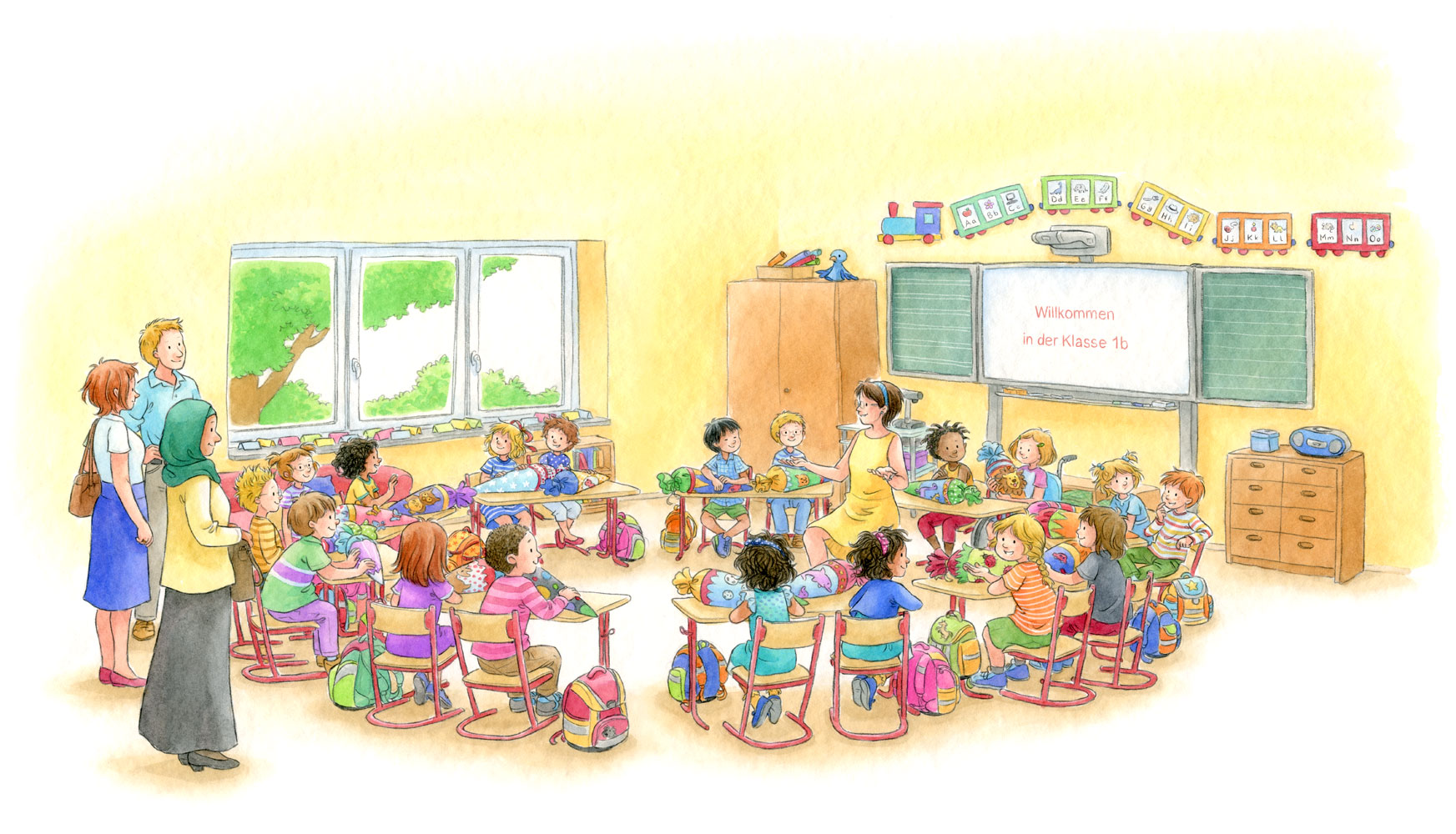 These are from “Conni goes to the pediatrician” (“Conni geht zum Kinderarzt”): 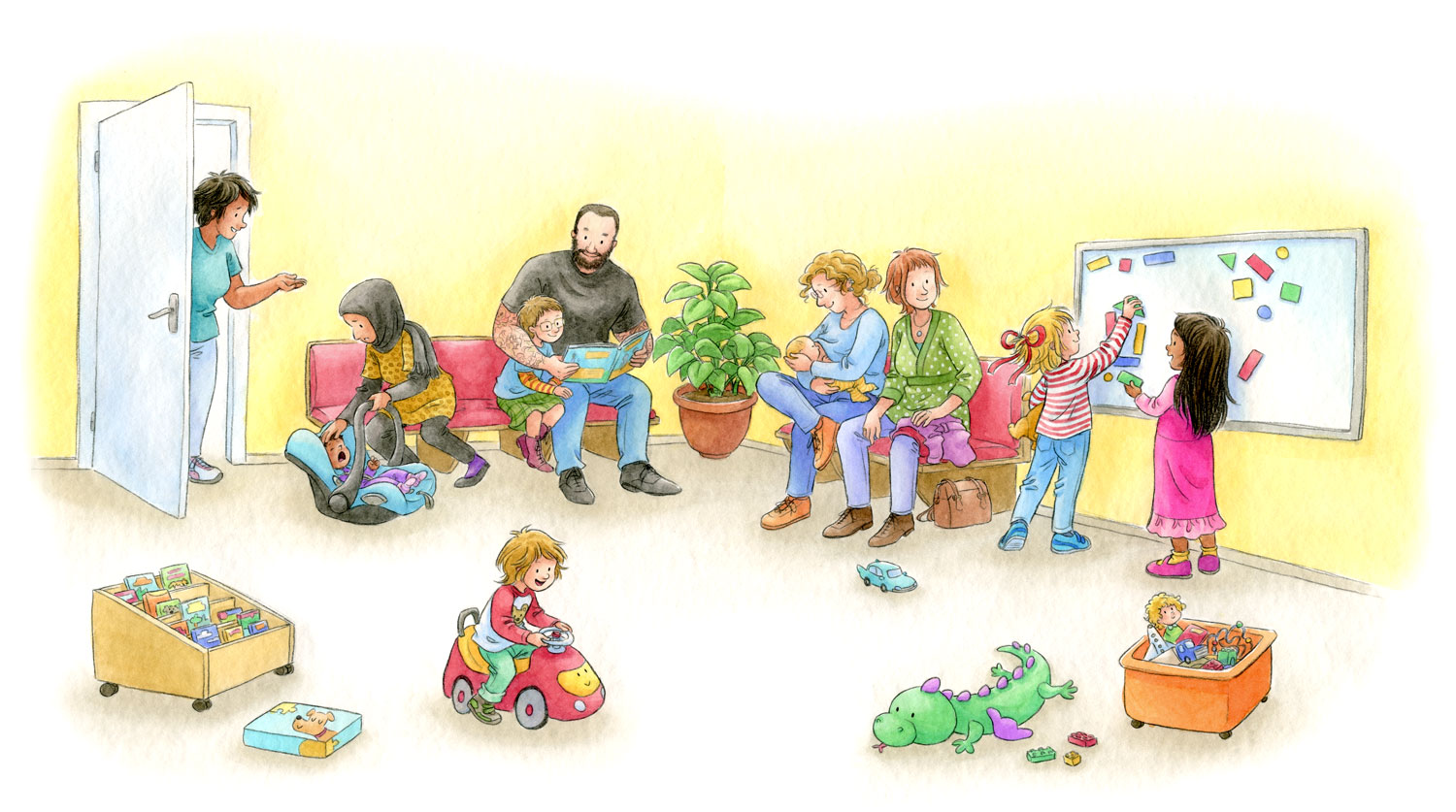 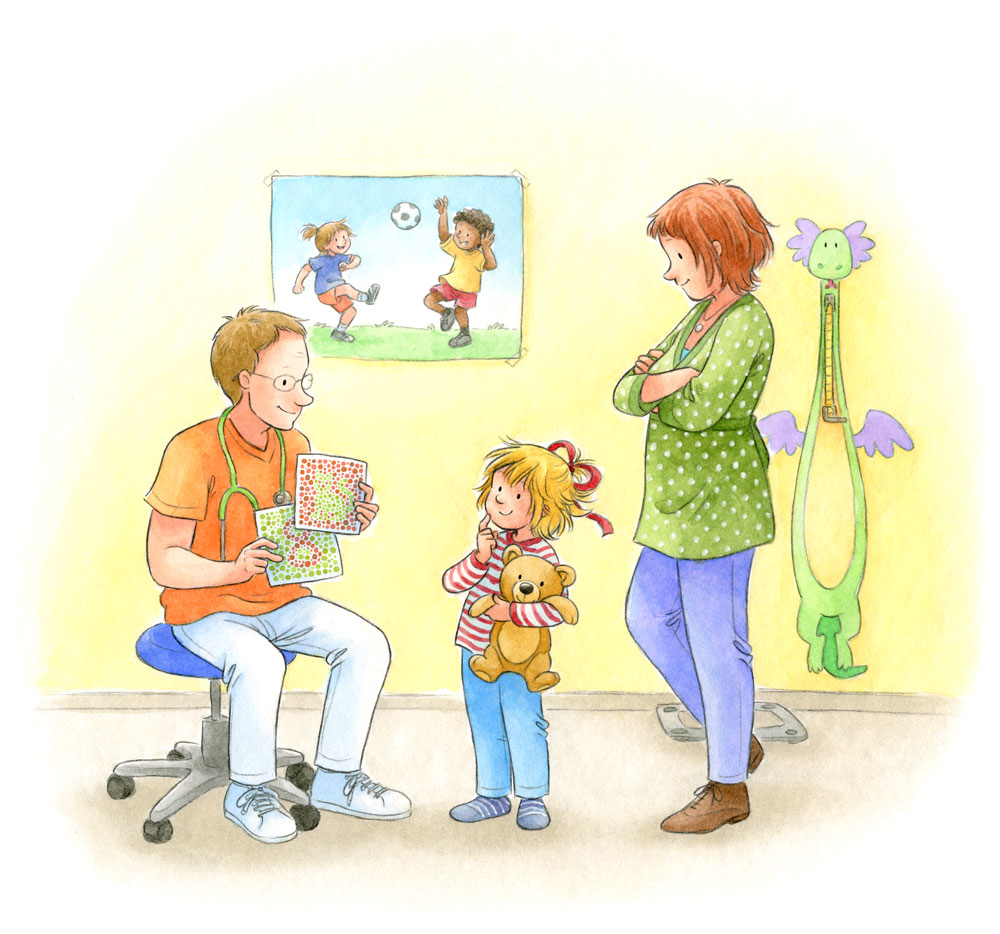 These are from “Conni makes pancakes” (“Conni backt Pfannkuchen”): 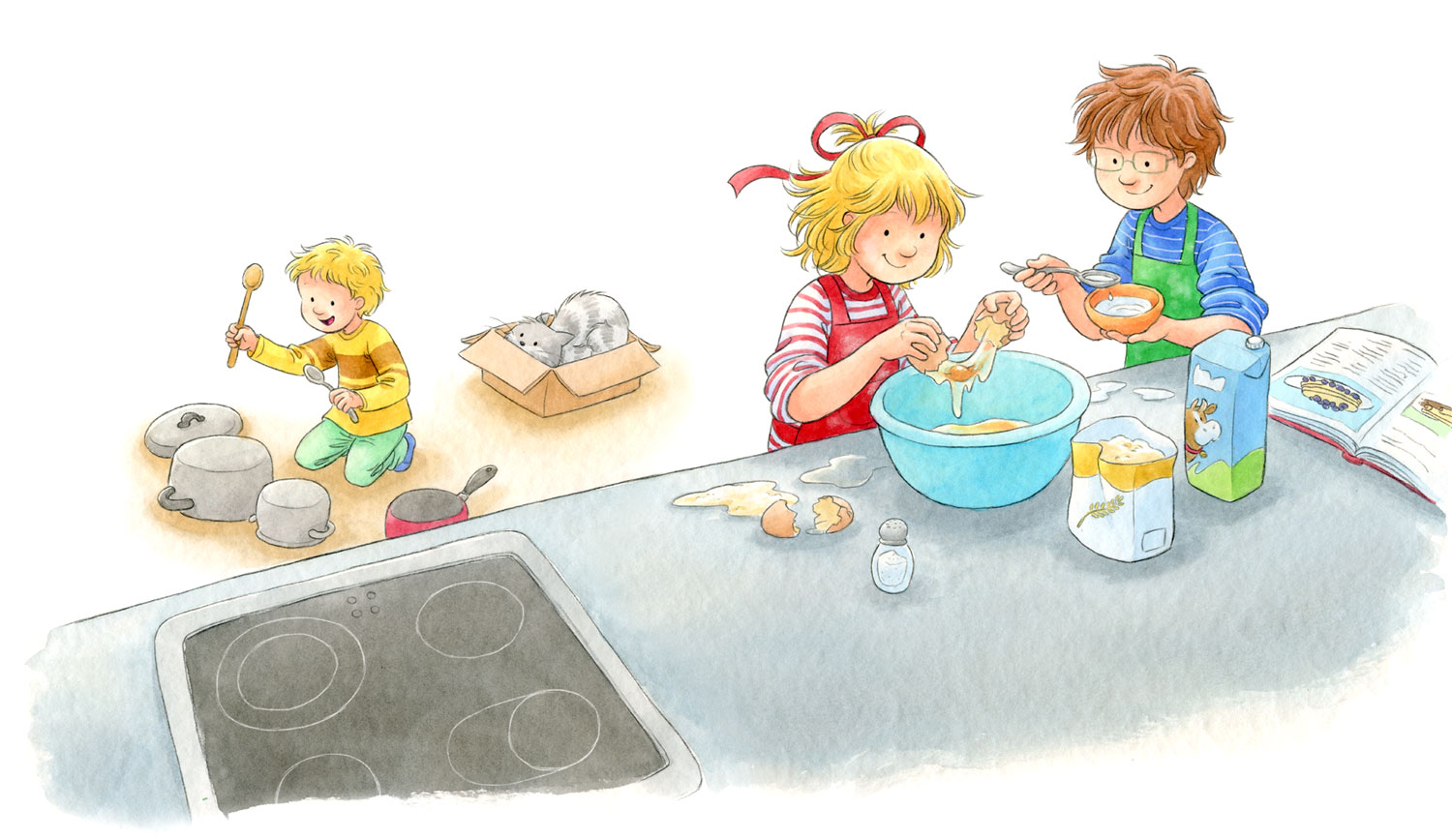 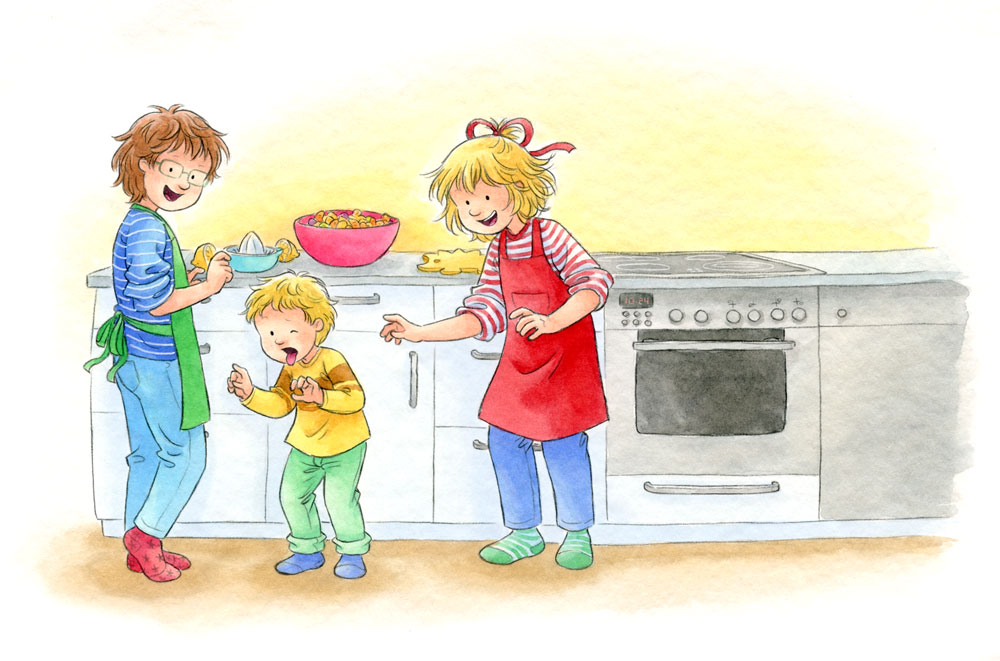 And last, these are from “Conni visits grandma and grandpa” (“Conni besucht Oma und Opa”): 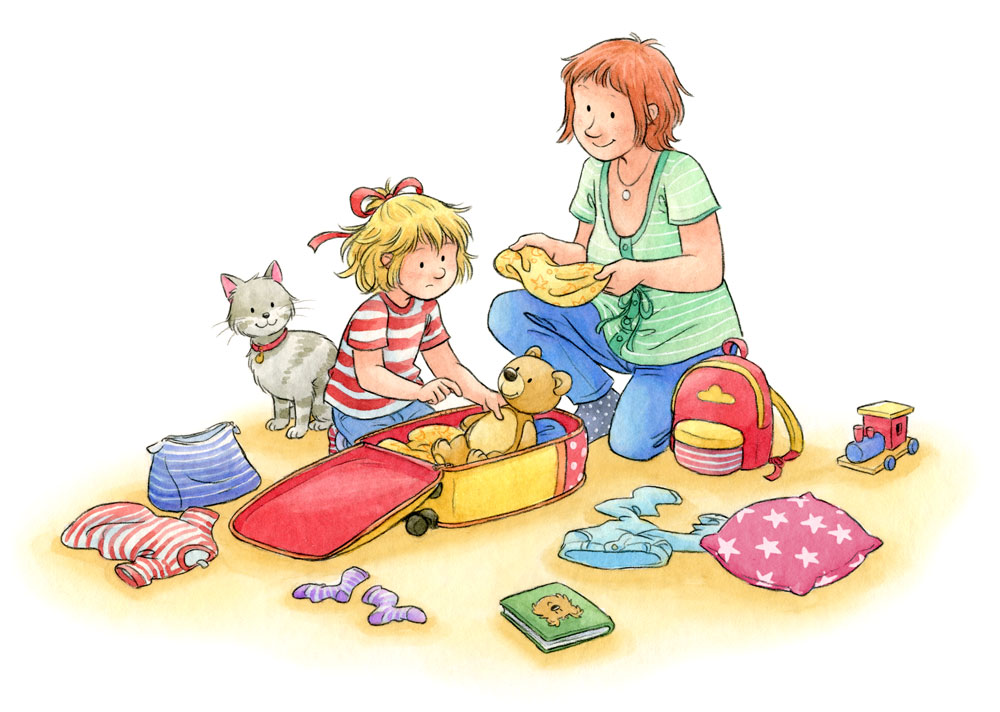 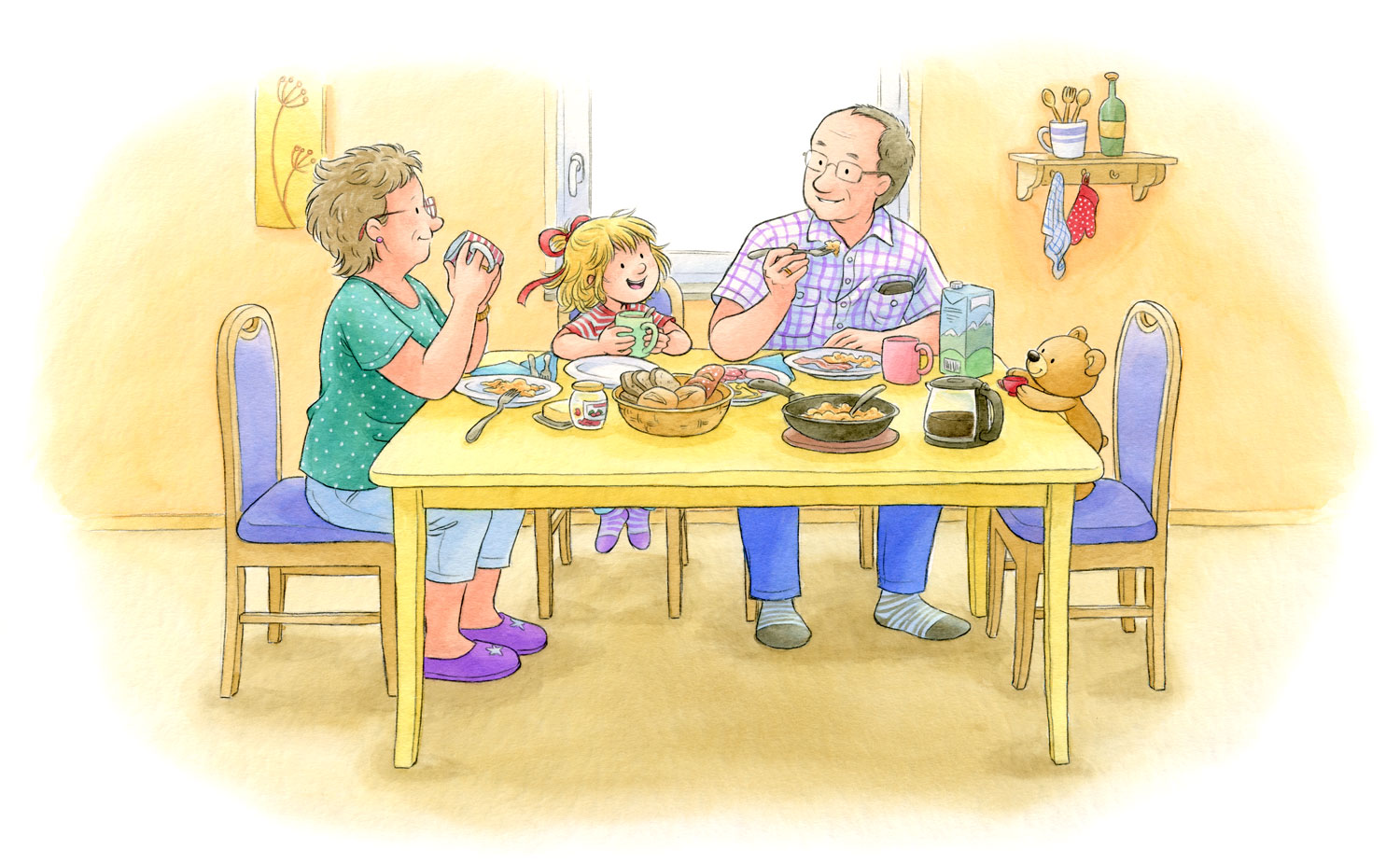 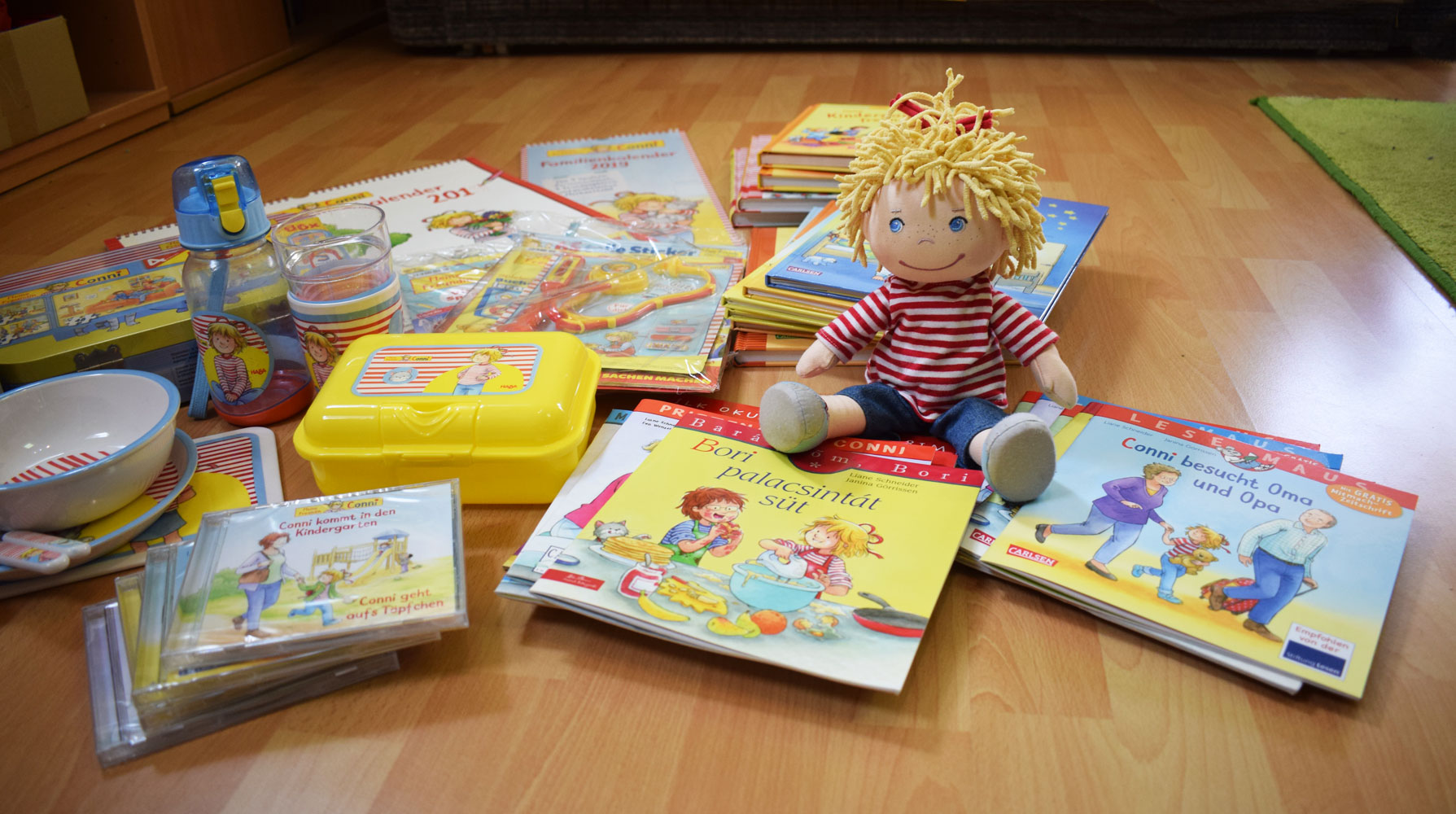 It’s been over a year since our last update, we know, we know… We’ve just been very busy and since I don’t have much time right now either, I’ll just leave you with some photos to prove it!

Working on “Conni” has definitely changed our lives. We’ve published 9 fully illustrated books so far and more are on the way. There’s quite a lot of merchandising, additional books and also some translations into foreign languages. 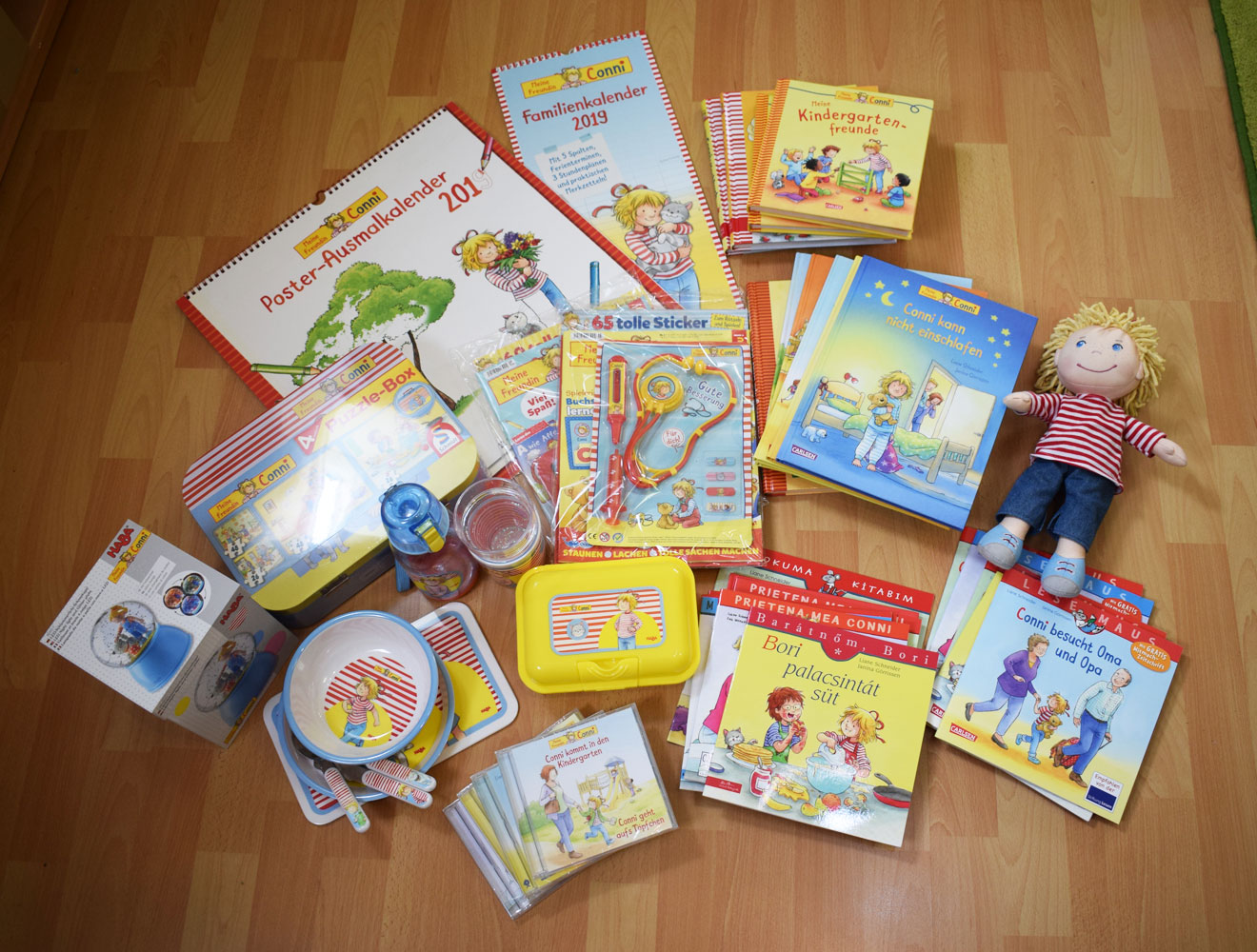 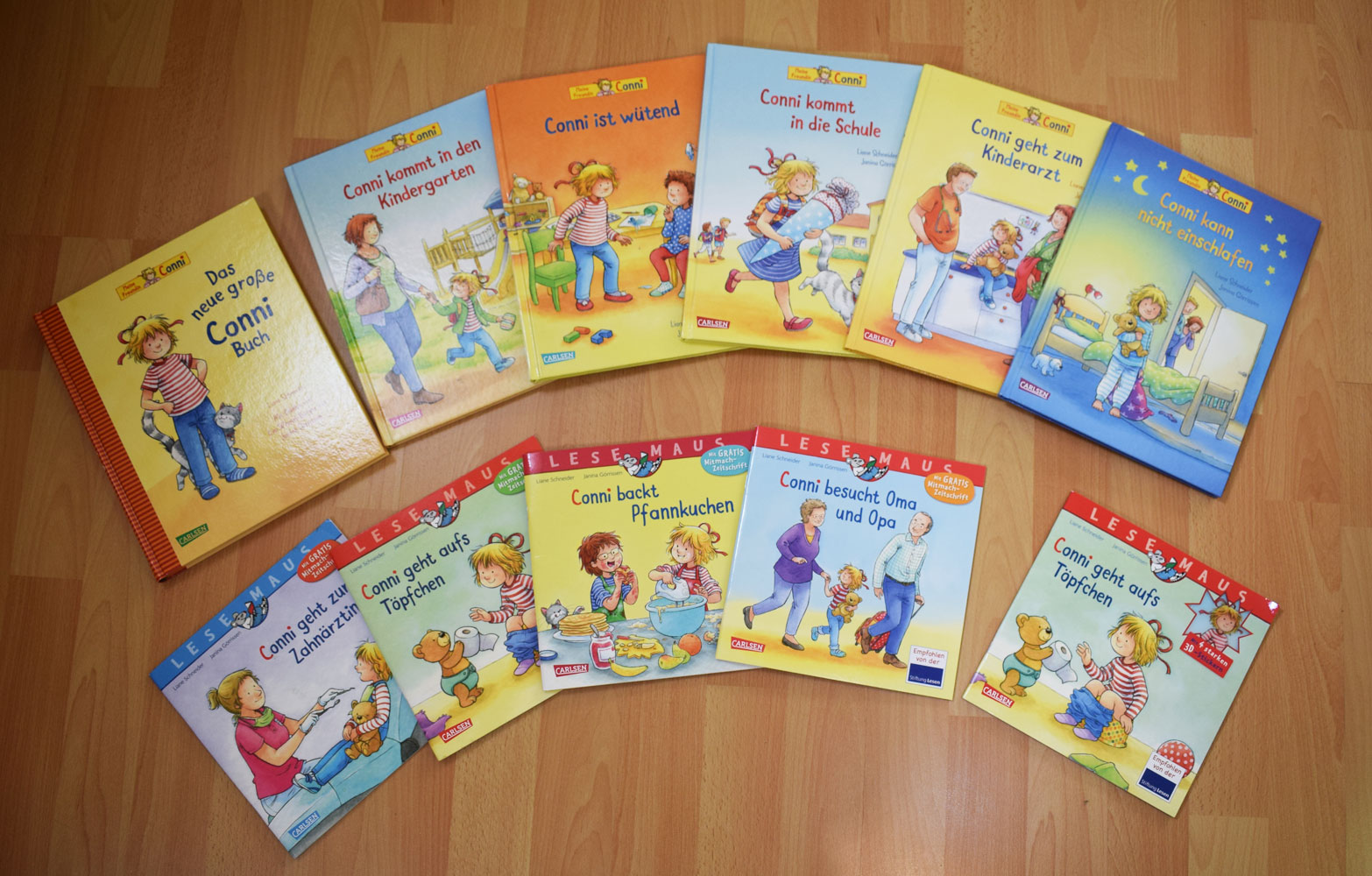 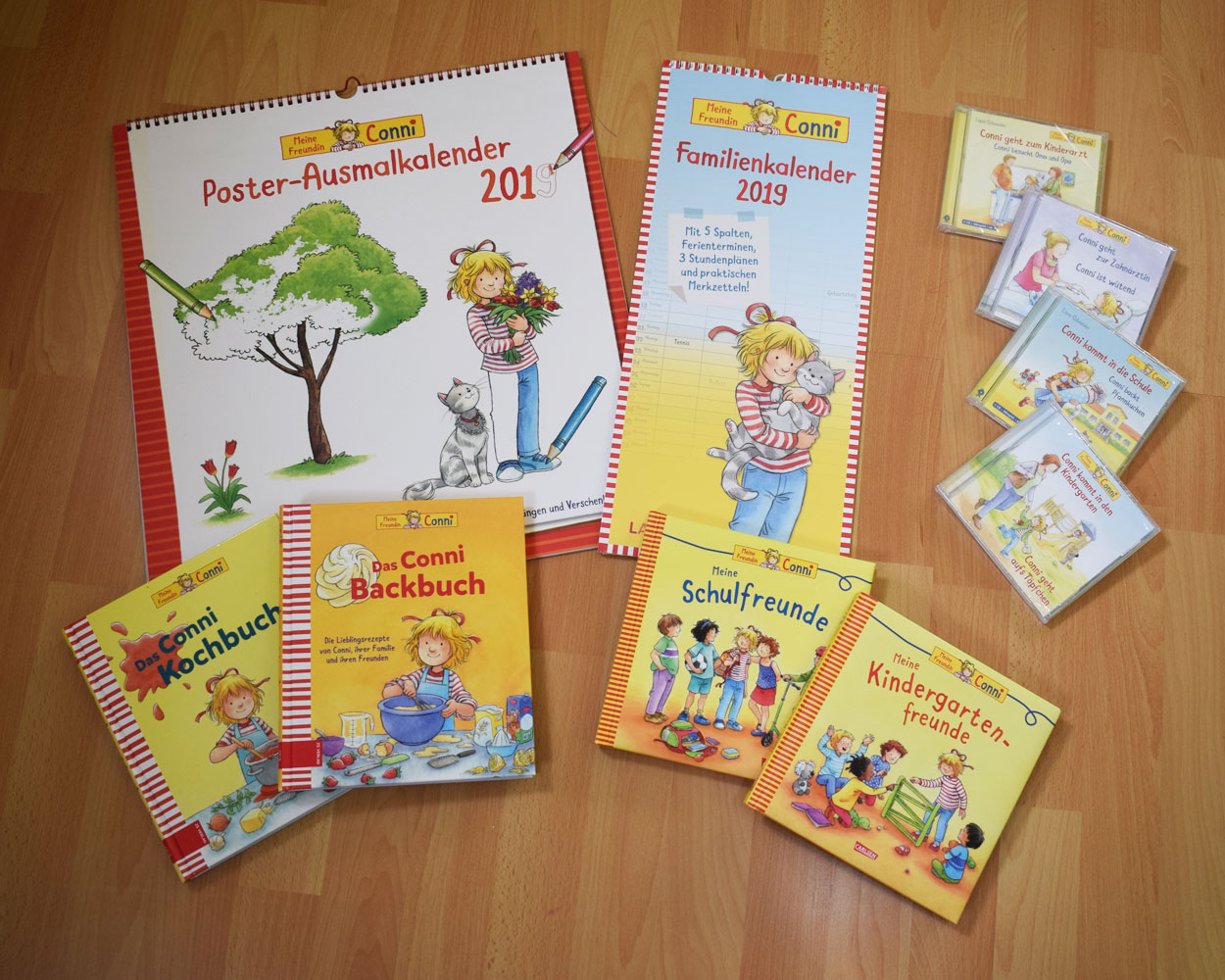 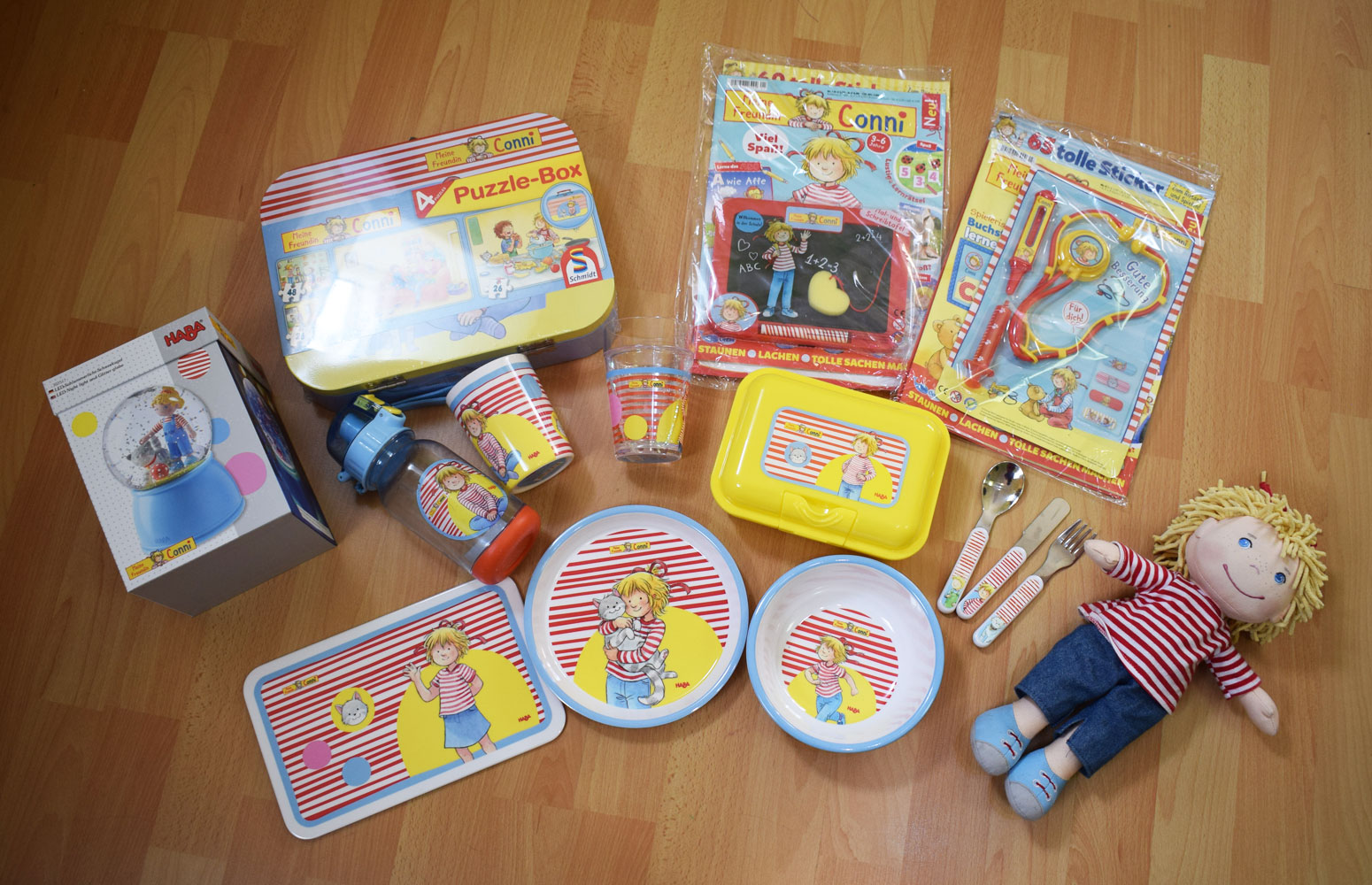 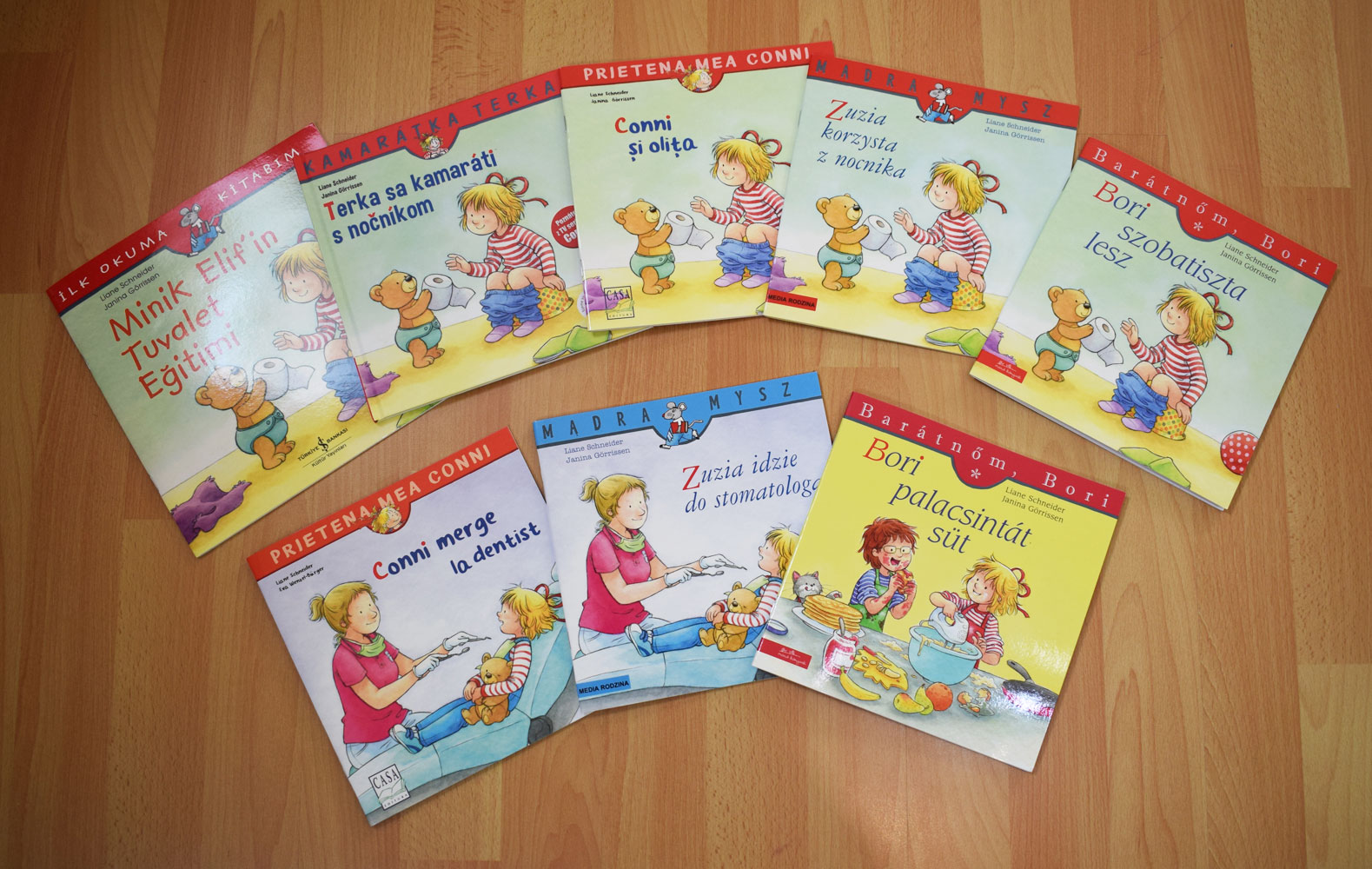 We truly want to show you a few things from the books in more detail, but for now, this will have to do.

Here’s a list of the books we’ve made so far: 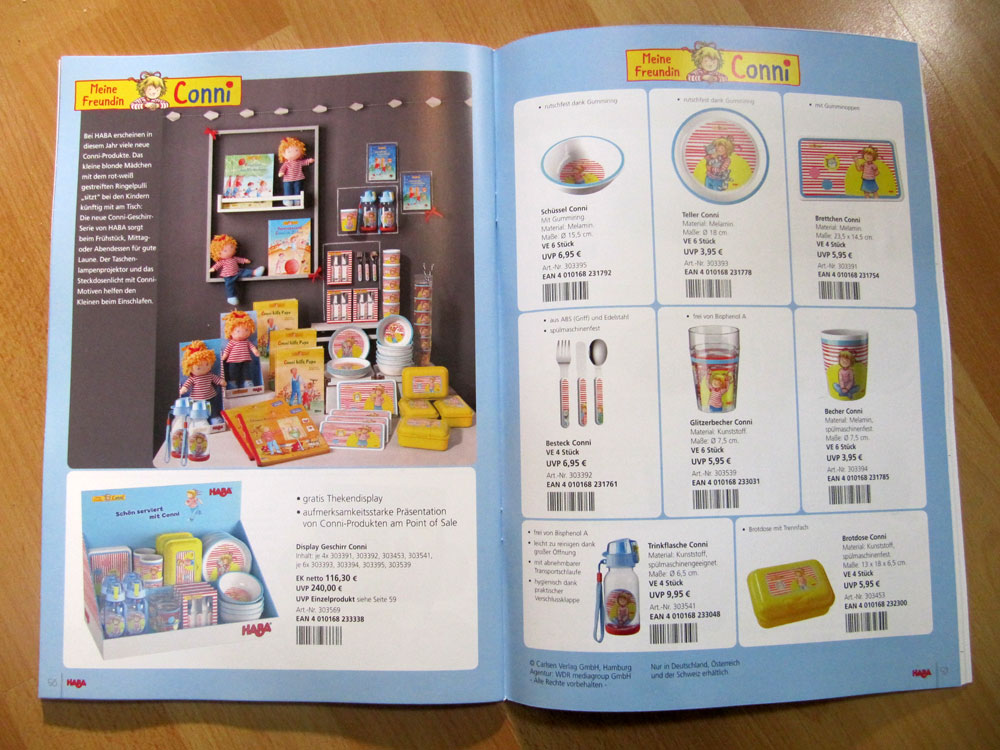 Oh yes, we are going to spam you with Conni stuff this year.

Just fresh out on the market, Haba produced some beautiful plates, glasses and other tableware with my drawings! I’m so excited and hope we’ll get to see them up close very soon. 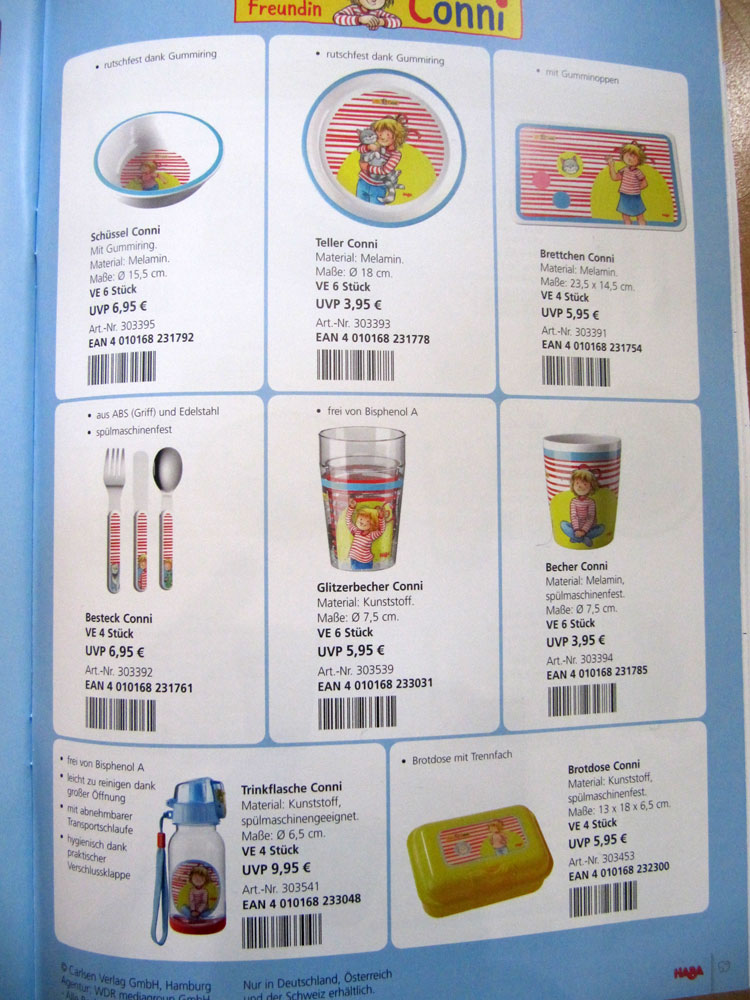 And even though we don’t have much to do with these, they are too cool not to show. Haba also made some Conni figures for their Little Friends line: 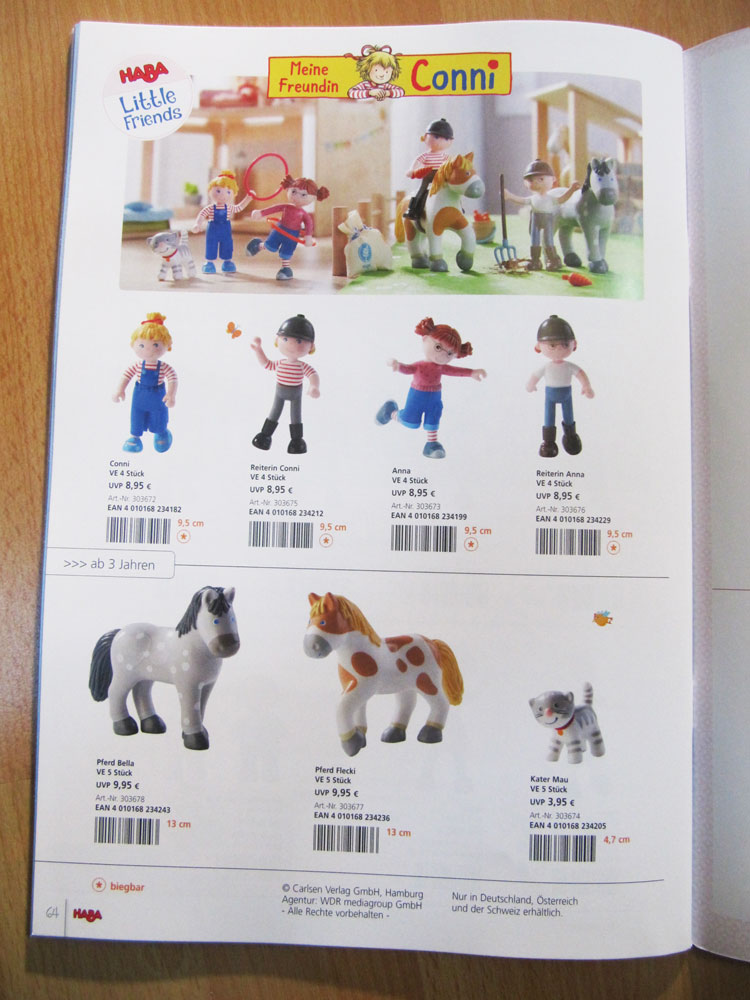 We already posted this on our Facebook page a while back, but here’s what’s next in the Conniverse for 2018!

In spring, we’ll have 3 new books coming out: “Conni goes to school”, “Conni makes pancakes” and a “school friends” book (kind of like a poetry album where your friends can write and draw stuff about themselves) similar to the “kindergarten friends” that came out last year. 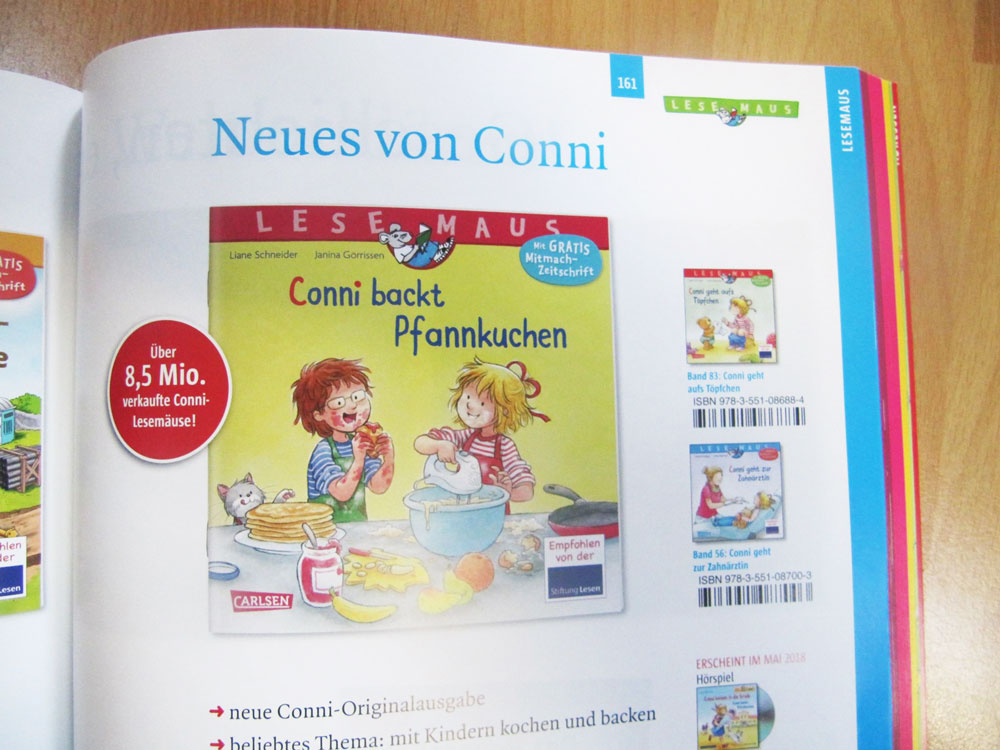 Also, but this is already for 2019, there will be 2 calendars coming out by Lappan, a family calendar with columns for up to 5 family members and a calender which the kids can color themselves! 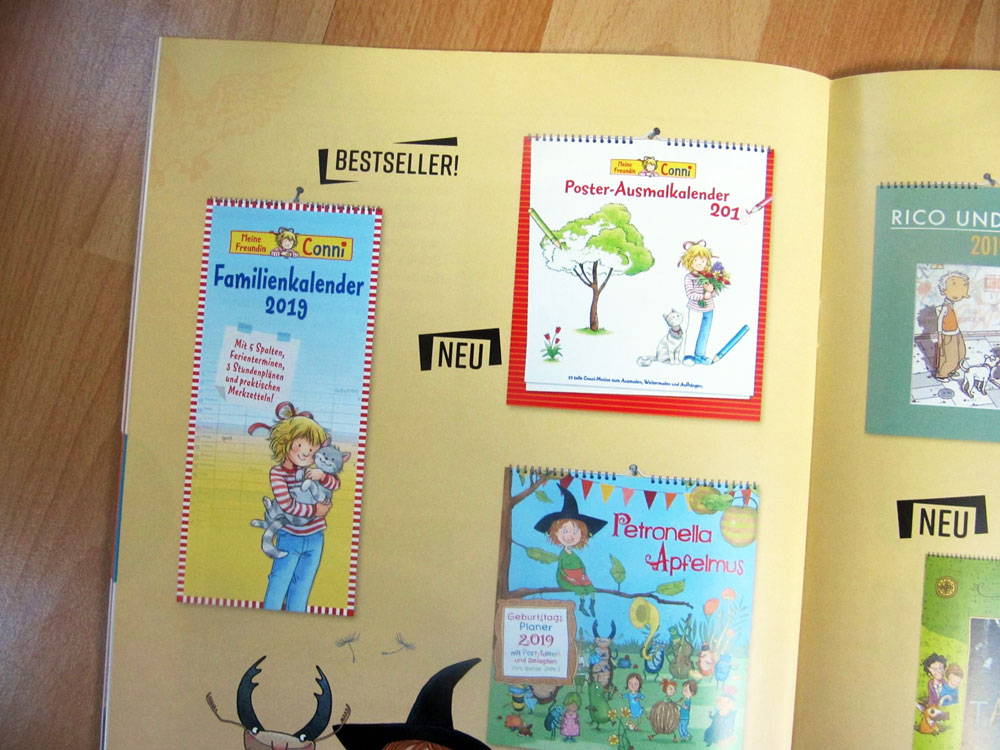 Yesterday a big package containing the latest games I did for Haba came in! I worked on 2 projects for them this year, on the one hand a new card game featuring Dragon Thunder Tooth and a set of three puzzles much like the ones I did for Princess Mina, but with a boy and his dragon.

Let’s start with the puzzles.

You might recognize the main illustration for that from our portfolio – it’s a painting I made back in 2013. The people at Haba liked it so much that they wanted to use these characters for the puzzle set. The main image could be used just the way it was with a few more details added in.
It was really cool for me to draw those two characters again.

A little side note on the third puzzle: I was told to draw the knight / boy “rescuing” a princess from her tower or something like that, but instead of just having a passive princess I decided to have a bolder, braver girl who managed to escape from the guards all by herself, she just needed a ride to get off the tower. In my first sketch I actually had her standing on top of the two guards whom she knocked out by herself, but the editors thought that was a little too brutal for the target audience, even though they liked the idea.
So – you might not be able to tell the whole story just from that single picture, but there it is. 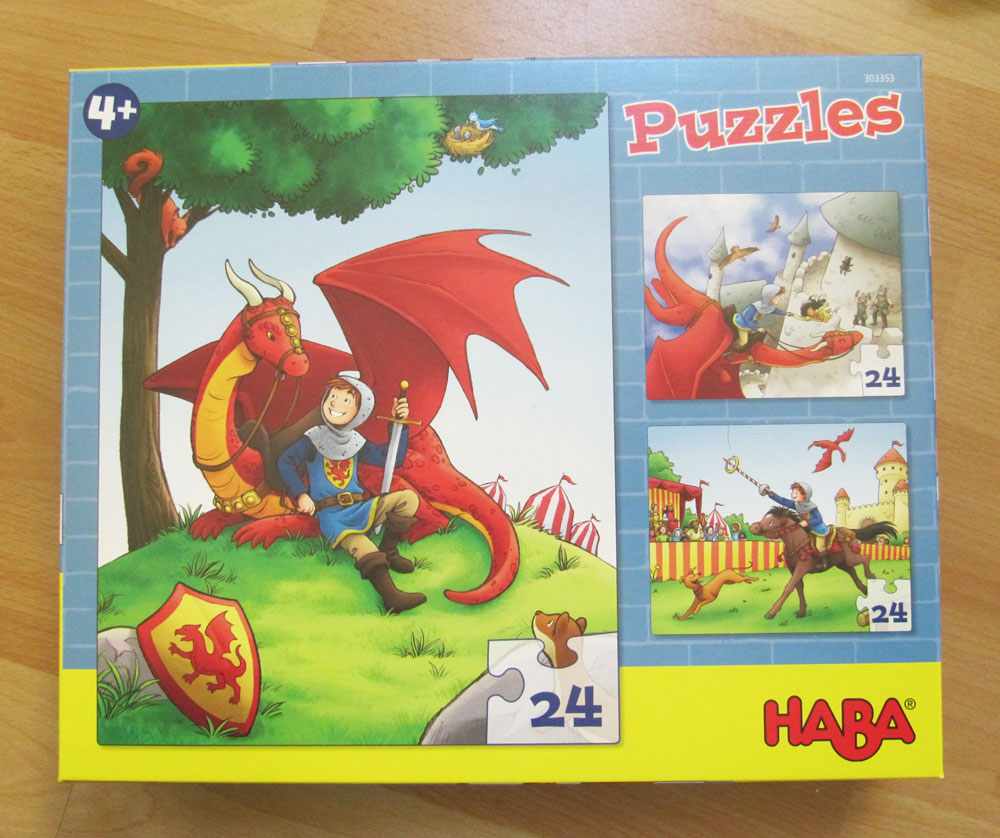 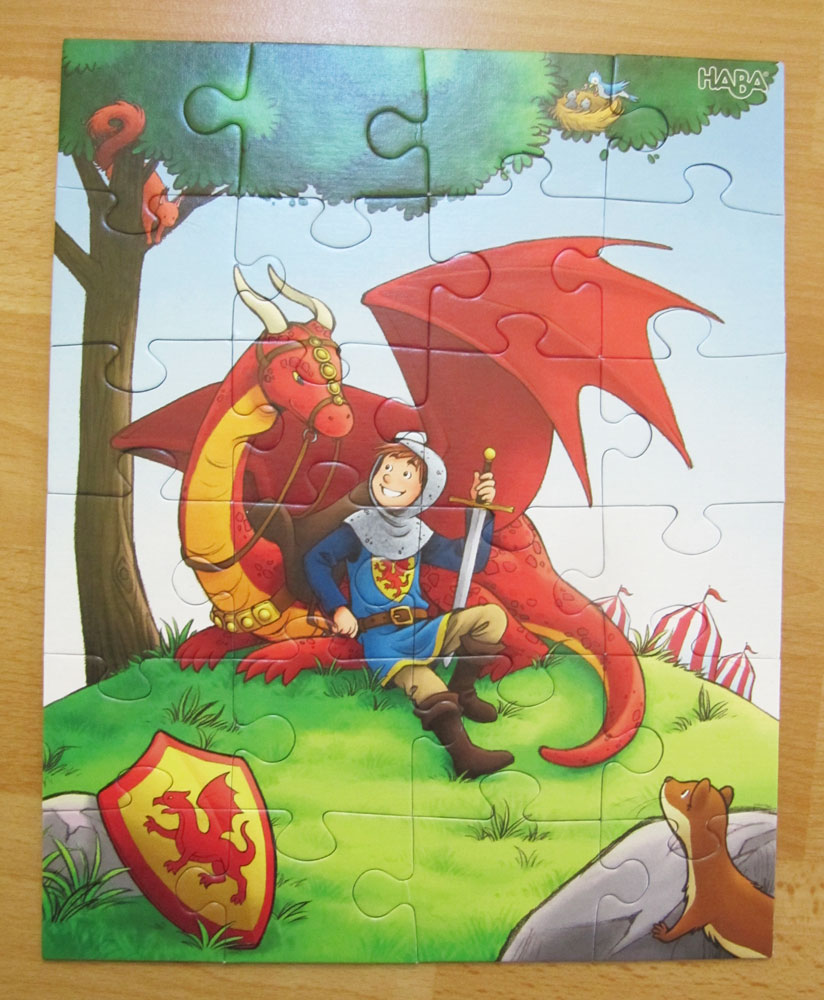 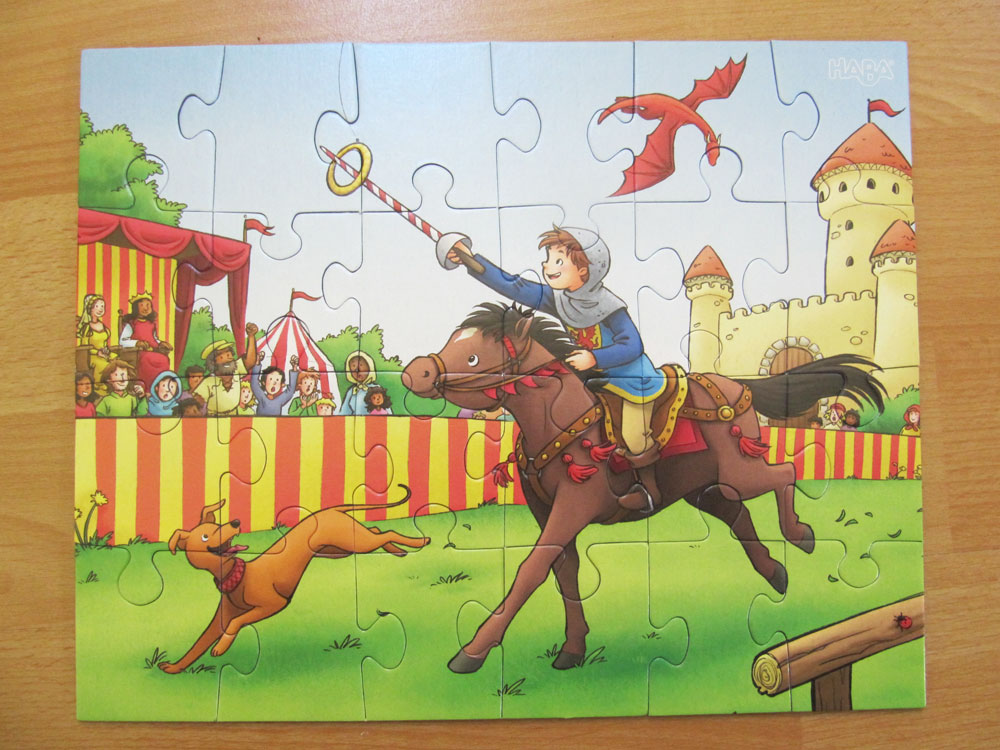 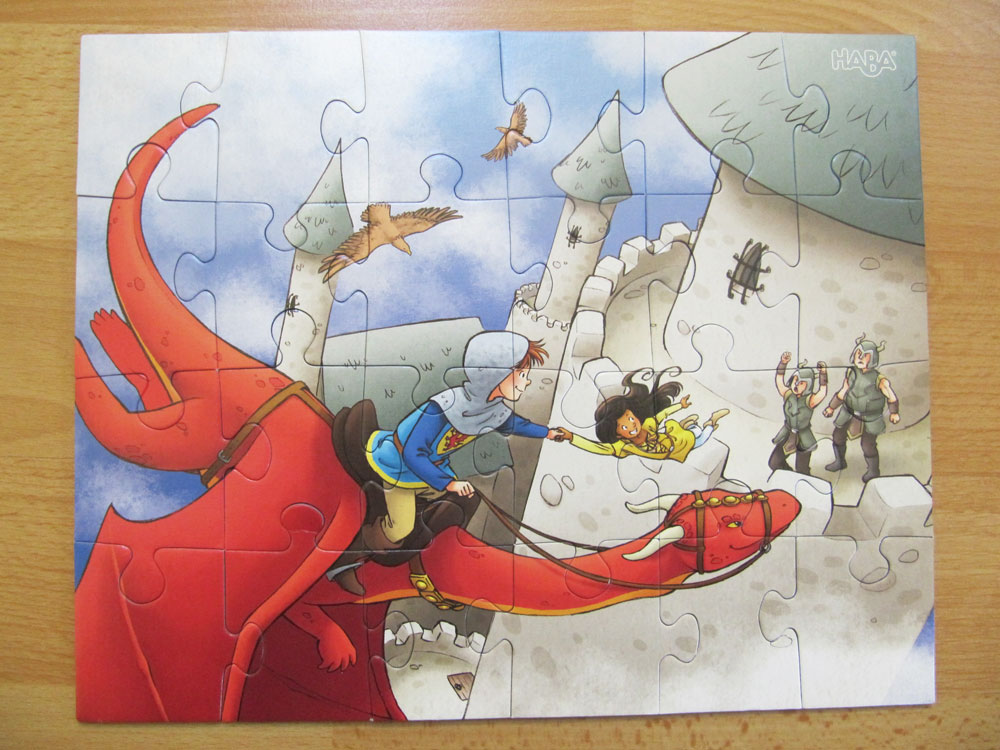 As for the second game, it’s a Happy Families game (it’s called “Dragon Rapid Fire Quartets” in English – I’m a bit confused about the name change here, but whatever) featuring the same dragons we already knew from the Dragon Thunder Tooth board game, plus 4 new dragons. I’m a little sad that I had to change Fire Tails’ color from the original orange to brown, but it was to avoid confusion in the game.
But I do love to draw these little fellas and I’m happy I could create new ones as well! I love dragons. 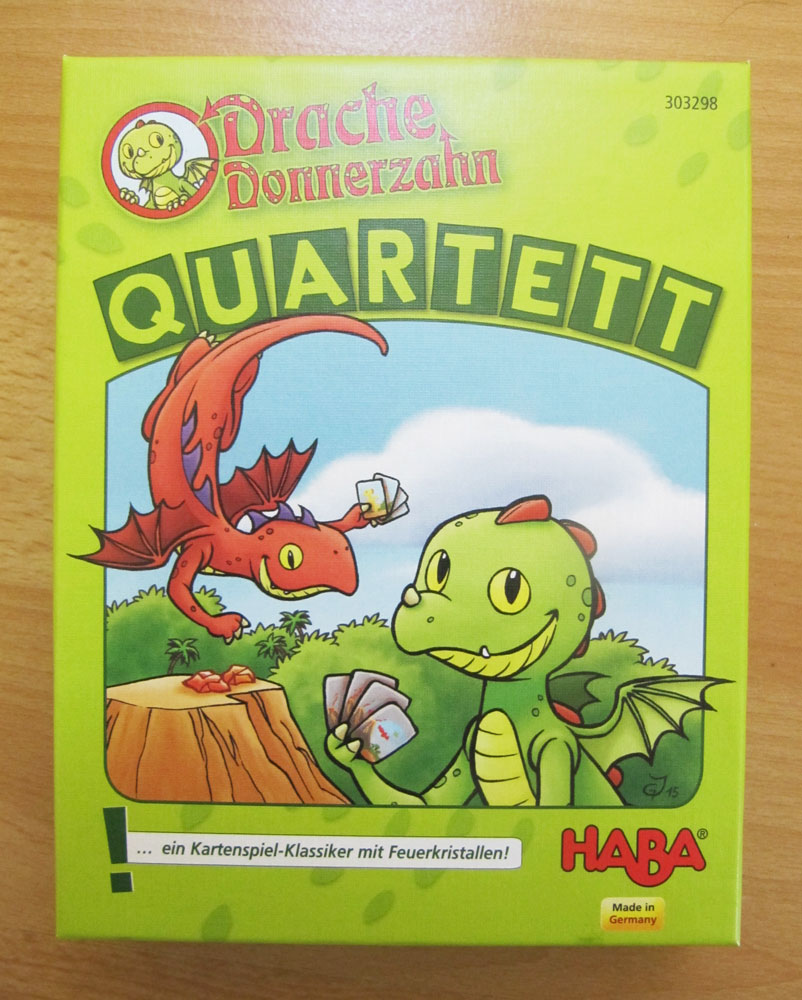 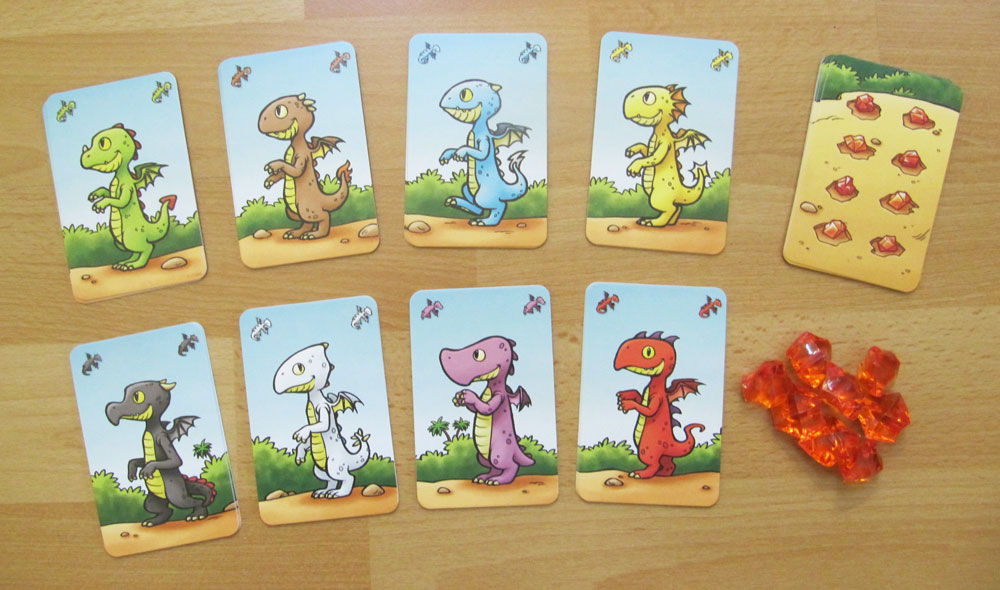